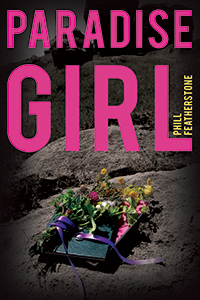 Today I would like to give a warm West Country welcome to author Phill Featherstone and his novel Paradise Girl. Welcome Phill! As soon as I read the blurb for Paradise Girl I was intrigued! It is very close to the top of my TBR pile now… Can you tell us a bit about yourself, where you grew up and perhaps how this has influenced your writing?

I grew up on the Pennines only a few miles from Haworth, where the amazing Brontë sisters lived and wrote. As a child and teenager I roamed the landscape, striding like Heathcliff (I liked to think ) over the peaty moors. After many years living and working in the south and the midlands I returned here, to my roots, and started writing.

Heathcliff eh?… pondering… OK let’s move on.. have you ever had a job other than that of a writer?

I took a degree in English and qualified as a teacher. I taught English in secondary schools, mostly to 6th formers. I’ve also been a taxi driver, worked in a store and sold ice cream (I was Mr Whippy!)

Wow English teacher, now that’s a tough gig, all those teenagers! Yes a tough gig indeed! So tell us a bit about the inspiration behind Paradise Girl?

I live on the hills overlooking a small town in the valley. In the summer of 2013 there was a power cut. The day was still and hot. I worked on my laptop until the battery ran down, then took a cold drink out into the garden. I settled on a bench and looked around, and it struck me: I couldn’t see or hear any movement. None at all, except for the silent revolution of the wind turbines on the opposite hill. There were no signs of life anywhere. It was as if the valley and all around it had gone into a state of suspended animation.

I had a thought. Suppose there was no one else. Suppose everyone had disappeared – perhaps run away, been taken by aliens, or felled by some deadly virus. What would I do? How would I survive? Could I?

The idea for Paradise Girl was born. All that was left was to write it.

I’ve wondered that at times too, sometimes I think it’s a real possibility. What are you currently working on?

I’ve just finished a new novel, called The God Jar. It begins with a young couple on holiday on the Cornish coast finding a mysterious jar. The action jumps back 400 years to the court of Queen Elizabeth I and to Dr John Dee, known as ‘the Queen’s magician’. We learn what the jar actually is, something of its potency, and how the Doctor used it to change the course of history.

Back in the present, the couple learn that their find is very special. Others are interested in it and in the power it brings, and they will stop at nothing to get it.

Oh, I think that’s called a time-slip mystery thriller, well that’s what I’m calling it! The God Jar sounds really interesting…em… I can see I shall have to decant my TBR pile onto the floor when The God Jar is released! Now talking of going back in time… If you could go back in time what would you tell your younger self?

Start writing sooner. Don’t hang about or make excuses. Make time, make space, and get on with it!

Really good advice Phill. I think I would tell myself the same thing! Thank you so much for joining me today. Phill will kindly be giving away a signed copy of Paradise Girl to one lucky reader. All you have to do is leave a comment below. The winner will be chosen at random. To give you a taste here’s the blurb followed by a snippet:

Paradise Girl is told through the diaries of 17 year-old Kerryl Shaw. The Shaw family live on a remote hilltop farm, and they think this will insulate them from a highly infectious virus which sweeps the country. It doesn’t, and with her family and all around her gone Kerryl finds herself alone. Her diaries show how isolation and loneliness affect her, and build to a dramatic conclusion on the northern moors.

“…impossible to put down… writing of a high literary standard, with the kind of psychological depth which lingers in the mind long after reading.”

I messaged my friend Josie. No reply. I called her number but there was no answer there either. I wanted to go to her house to find out what had happened but Lander, my brother, said I was being selfish.

‘What happens if you catch the virus and bring it back?’ he said. ‘Do you want to infect all of us?’

Of course I didn’t, but I was worried about Josie. I called Penny Cross. She lives in the same street as Josie. She said she didn’t know about Josie herself but she’d seen an ambulance outside her house. I said that might mean they were taking somebody to hospital.

‘No,’ she said, ‘nobody goes to hospital any more. They’re using ambulances for hearses now.’

I called Steve. The picture kept jumping but I could see he looked awful. He said everybody was dying and the young people were having a ‘Death’s Doorway’ party. They were going to dance and drink and shag and get high until one by one they dropped. He said people were breaking into the stores and taking what they wanted and there was no one there to stop them. He said I should join him, because if you’ve got to go that’s the way to do it.

He swung his phone in an arc. There were a lot of people in the street. Some of them were half naked, some had bottles, some were dancing. Several were lying on the floor, drunk or maybe dead. In the background a girl was puking up. It made me feel sick.

I told Lander about the pictures. ‘Good for them,’ he said.

I got angry then. How could he not see how awful it was? ‘Why don’t you go and join them if you think it’s so fantastic?’ I yelled.

Lander and I seemed to be quarrelling a lot now. We didn’t used to, well, not as much. We might have gone on as we were for who knows how long. We might all have survived, because as long as we kept to ourselves how could the Infection get us?

Bryst put an end to that. I don’t blame him. He didn’t set out with the intention of killing us. He was just looking for some way to save his boy.

Wow, I can’t wait to read it. Once again thank you so much for sharing Paradise Girl with us Phill. Remember to be in with a chance of winning a signed copy please leave a comment in the box below. 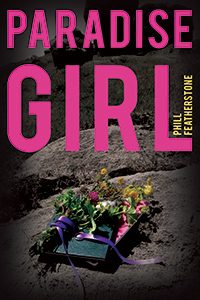 Phill was born and brought up in West Yorkshire and trained as a teacher before reading English at Cambridge. He also has an MA in Education.

Phill taught English in schools and colleges in London, Hampshire and Leicestershire and then spent five years as an education adviser for Northamptonshire Local Authority.

In 1997 he and his wife, Sally Featherstone, started a publishing company specialising in resources for the early years. The company won the IPG Education Publisher of the Year award in 2007, and in 2008 the business was acquired by Bloomsbury Publishing. From 2008 until 2014 Phill and Sally ran a company providing training services for teachers. Since then he has spent his time on writing and conservation work. He has co-written with Sally several books for teachers and he now concentrates on fiction.

When he’s not writing, Phill enjoys reading (of course), listening to music, going to concerts, galleries and the theatre, and playing the saxophone (badly). He lives in a farmhouse on the pennines overlooking the Calder Valley. Phill is a member of The Society of Authors.